The green cake in the background is not failsafe as the icing is coloured with green, but we really wanted to do this cake as she was obsessed with the book. We made sheep cupcakes that were failsafe to hand out and gave the green cake to someone as a thank you for letting us use their space for the party for free.

Cupcakes were the Women’s Weekly cupcake recipe, iced with butter cream (using Nuttelex not butter). These were topped with mini marshmallows from the cake section of Woolies. These are not failsafe but for my daughter’s cake we just cut Pascall’s marshmallows (From Allergy Train) into tiny chunks and put them on top and they had the same impact. The heads are made with Pascall’s marshmallows and eyes that were from Big W and not failsafe, but we took them off our daughter’s and she didn’t notice.

The green cake was a Women’s Weekly vanilla butter cake recipe using rice milk and Nuttelex as substitutes. We used a buttercream and coloured it with green food colouring. The sheep is made with ready roll icing from Coles and coloured with green food colour. Basically just make a little lump and cover with a whole bunch of little balls and a couple of longer bits for legs. A larger ball for the head with eyes and nose drawn on with a skewer. You can’t go wrong. Flowers were also from the baking section at Coles and the bunting was from Kmart and attached to two paper straws that we cut to size. 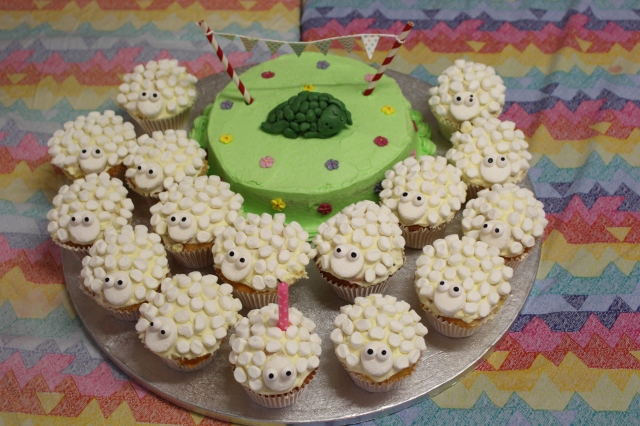